Colmar, from the Roman Columbarium, for mentioned for the first time in 823, in an act of donation by EmperorLouis le Pieux, son of Charlemagne. In 9th century Colmar’s architecture was in the form of huge wooden buildings, barns, stables, a press, an inner courtyard and dovecote.

The city continued to develop in the MiddleAges until it became an Imperial City in the 13th century. At that time religious orders established themselves in Colmar. Franciscans, Dominicans and Augustinians built their places of worship and dwellings, with numerouschurches and monastic buildings still standing today in the historical centre.

In 1354, Colmar took part in theestablishment of the Decapole, federation of ten cities of Alsace united to defend their privileges and Imperial Citystatus. The Koïfhus building finished in 1480 accommodated the meetings of the Decapole political members until 1678, when Colmar became a “Royal City of France” after the Revolution. The Thirty Years’ War (1618-1648) caused great upheavals that ruined the city, and in 1635 Colmar was placed under the protection of the King ofFrance without going as far as abandoning its status of Imperial City, its privileges, rights and customs.

In 15th and 16th centuries the city were in its golden age, when it found wealth thanks to its merchants, agriculture andabove all wine making. Superb buildings and other sumptuous abodes were built. In 1698, Colmar became thejudicial capital of Alsace province with the establishment of the Sovereign Council of Alsace. The Palace of theCouncil was finished in 1771, and today it houses the Court of First Instance. Voltaire, who stayed in Colmar forthirteen months between 1753 and 1754, described the city as “a city half-German and half-French, and wholly Iroquoian”.

2 February 1945 is a key date in the city’s history, the most important of the 20th century. For thepeople of Colmar, it marks the end of the Second World War with the battle of the “Colmar Pocket”, the last onFrench soil and which incurred extremely heavy losses. 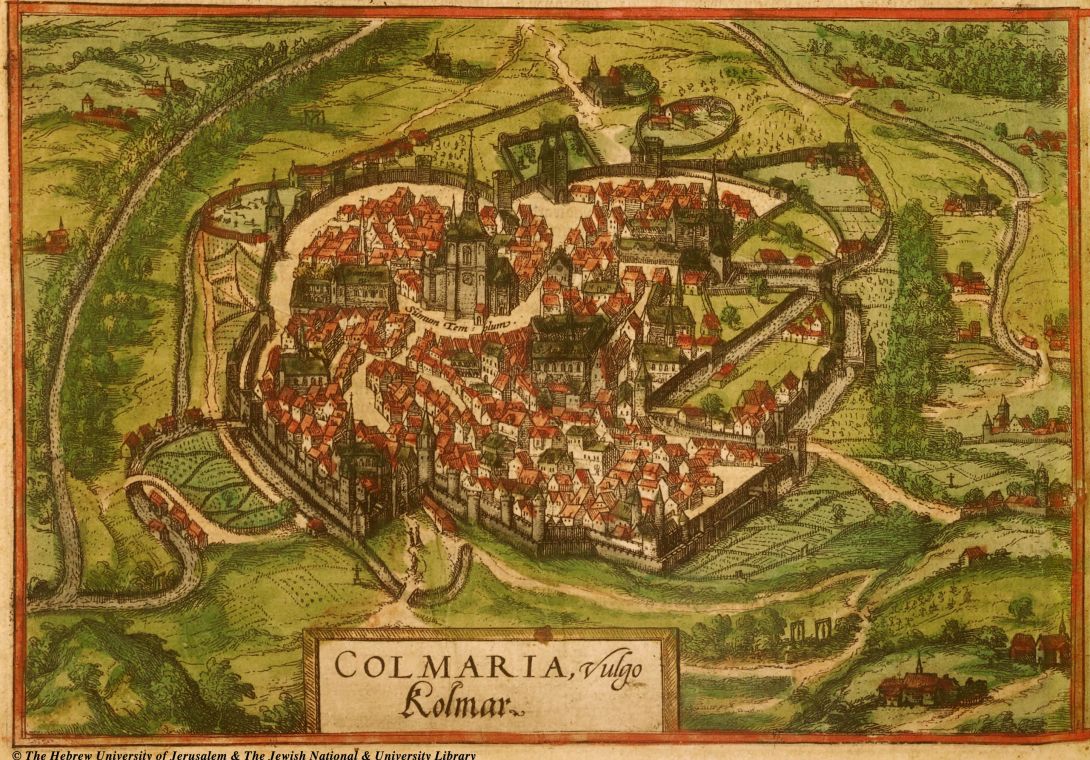 The History of Colmar in 20 key dates

823   The Carolingian domain, “Columbarium” was first mentioned in a charter of the emperor, Louis the Pious

1226  Colmar appears in a text as a town in its own right (civitatis).

1278  Rodolphe of Habsburg grants the town franchise under the Franchise Charter.

1354  Colmar participates in the creation of the Décapole, federation of the 10 imperial towns of Alsace.

1360  Colmar is endowed with a new constitution by the emperor, Charles IV, which was a huge victory of the bourgeoisie over the nobility.

1480  Construction of the current building, the Old Customs House or Koïfhus.

1536  The Peasants War causes turmoil in Colmar, and the Reform’s first proponents appear.

1575  Late introduction of the Reform in Colmar.

1648 The Munster Treaty in Westphalia: French people leave Colmar, and the Empire’s imminence is confirmed.

1679 The Nimegue Treaty: Colmar becomes a royal town of France.

1698  The Sovereign Council of Alsace is established in Colmar, which becomes the judicial capital of the whole province.

1773 Establishment of the Military Academy of Colmar by the poet and teacher, Pfeffel.

1790  Colmar becomes the county seat of the Upper Rhine département.

1800  Colmar becomes the seat of the prefecture and of the Court of Appeals.

1854  The cholera epidemic claims many lives.

1871  Under the Treaty of Frankfurt, Colmar, like all of Alsace, is annexed to the German Empire.

1918  On November 18th, the jubilant entry of the French troops in Colmar.

1945  On February 2nd, the town is liberated after the harsh battles of the “Pocket of Colmar.”

From his real name Jean-Jacques Waltz (1873-1951), Hansi was a painter, a draftsman and a caricaturist. Before and during the First World War he exe...

Auguste Bartholdi - Father of the statue of liberty

Frédéric Auguste Bartholdi, the most famous artist of Alsace of the 19th century, was born in Colmar in 1834. When his father, adviser at the Pref...

Born in Colmar in 1796, Armand Joseph Bruat is the son of a deputy of Haut Rhin, who made a career in the judicial authorities. He started his educa...

Jean-François Reubell: our only head of state

Son of a notary, Jean-François Reubell was born in Colmar in 1747. Lawyer at the Sovereign Council, he was elected deputy of the Upper Rhine at the...

Théophie Pfeffel Conrad (1736-1809) is the greatest writer of Colmar of the 18th century. His 1099 writings that were discovered have various liter...

Jean-Daniel Schumacher: Librarian of the Tsar

There is no trace in Colmar of Jean-Daniel Schumacher (1690-1761), who did not work in the region but in Russia, in Saint Petersburg. He was born in...

Only few elements about the early life of Georges Wickram are known. Born around 1500, he would have been an illegitimate child of Conrad Wickram, f...

Martin Schongauer: the glory of the painters

Martin Schongauer (1450-1491) was born in Colmar. His father was goldsmith and had bought the rights of bourgeoisie in 1445. After a travelling trai...

Jean Roesselmann’s father, who was born in Turckheim, was shoe repairer. This modest background did not prevent Jean Roesselmann to become the fir...

The history of Colmar in details

The first traces of Colmar date back to 823, when Louis the Pious, son of Charlemagne, drew up an act of donation in Frankfurt on 12 June. The Carolin...

A more arduous document than this charter, dated back to 29 December 1278, would be hard to find. It was signed by Rudolph of Hapsburg,...

Colmar was one of the ten cities comprising the famous league of the Décapole, and which still proudly claim their membership, even today. Popular im...

The first evangelical service held in Colmar took place on 15 May 1575, at 8 o´clock in the morning, in the Franciscan church, which had lain empty f...

These treaties were of immense importance for the history of Alsace and of Colmar. They put an end to a conflict that had been tearing Europe apart si...

"The strongest will win", declared Dr. Volmar who was working for Austria when the Treaty of Munster was being negotiated. The ambiguity of the t...

It is now 22 May 1698. The first meeting of the Sovereign Council to be held in Colmar is taking place in the Wagkeller, the old seat of the patrician...

Voltaire stays in Colmar from October 1753 to November 1754, arriving from the court of Frederick II of Prussia who dismissed him. He works in th...

The academy was military in name only and was for protestant children of mostly noble descent, who were destined one day perhaps to the arms care...

Since 1791, the departmental capital had been the seat of the constitutional bishopric of the Upper Rhine. Colmar had its own bishop and St. Martin´s...

The Treaty of Frankfurt, signed on 10 May 1871, saw France cede Alsace and the Moselle to Germany, thereby bringing to an end the Franco-German war wh...

The last epidemic of a long list and also the best documented as we can now see the figures in official documents as opposed to relying on accounts an...

The 2 February 1945 is a key date in the city´s history. For the citizens of Colmar, it marked the end of the war, even if fighting continued for a...

The restoration of the tanners´ district is probably the best known and most spectacular of the works carried out in Colmar. It all be...

The Four riots of COlmar

The hearses riot, in 1855, proved fatal for Mayor Chappuis. Up till then, the good people of Colmar had gone to their final resting place, the Rappend...

In 1854, at the height of the cholera epidemic which had a devastating effect on Colmar, the authorities, scared stiff by the deplorable hygiene con...

Nine years later, the city council, running short of cash, decided to tax the wood which local people, especially the poorest, would, for a token pa...

The local market gardeners and winemakers used to drink a wine that was made purely to quench their considerable thirst. This rough plonk called ...

The beast of Colmar

The informed visitor of Colmar knows that it is best to steer clear of the rue des Clefs at certain hours of the night. The street, by day a bustling shopping area (the Town Hall is also in the same street) at nightfall becomes the haunt of a terrifying calf, the famous Colmar Nachtkalb.

No one knows exactly how long he has been playing his evil tricks, lowing mightily from his hiding place and sometimes charging poor animals that have wandered away from the safety of their homes or tourists staggering out of the local wistubs, their bellies full of the local wine.

The club of Hercules

Hercules, the half-God, on his way back from the garden of Hesperides, found himself in the region between the Vosges and the Rhine, that would later become Alsace. It was late, hot and he was thirsty. He decided to halt and drank local wine that was (already) good.

Entering an inn, he downed vast quantities of the local wine which was reputed even then and thereupon fell into a deep sleep, his head spinning. When he came to the next morning, his head was aching and he saw that his herd had run off during the night. Rushing off in hot pursuit, he left his club behind. The locals, with their love of all things tidy, eventually placed the forgotten club in the town´s coat of arms. This probably explains why, for as long as can be remembered, the inhabitants of Colmar have been known as the Kolbnarren - the mad clubmen.

The phantom of the milkwoman

If you lie in wait patiently, on certain nights in the rue des Augustins, just next to the prison of Colmar, you can espy the pale, furtive outline of a woman clothed all in white, the phantom of the milkwoman.

The poor woman, many, many years ago, was caught adding water to her milk and God, from a sense of justice, obliged her to return every night, in her penitent´s garb, to throw the offending liquid into the well of the Augustinians.

The mysterious horse with no body

Seldom seen, but even more terrifying, on certain days of the year around midnight, there can be heard whinnying and the clattering of hooves on some stairways, heralding the fleeting glimpse of the bodiless, emaciated head of a galloping nag.

Monday to Saturday: 9am to 6pm
Sunday and bank holidays: 10am to 1pm

We have put in place sanitary measures to guarantee you a better safety during your stay in our premises.