Auguste Bartholdi - Father of the statue of liberty 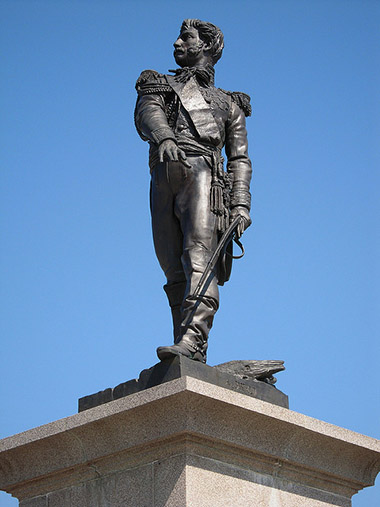 Frédéric Auguste Bartholdi, the most famous artist of Alsace of the 19th century, was born in Colmar in 1834. When his father, adviser at the Prefecture, died in 1836, his mother decided to go live in Paris. But she also decided to keep the family home in the rue des Marchands where she returned during school holidays with her two sons.

In Paris Bartholdi studied in the Lycee Louis Legrand and already knew the workshops of several sculptors such as Antoine Etex and Jean-François Soitoux. In 1854 he began the drafts of his first real monument: the statue of General Rapp. Ended in 1855, it was presented at the Universal Exhibition of Paris before being installed in Colmar in 1856. The same year Bartholdi made a trip to Egypt, which monumental art disrupted his work that he devoted at that time to historical and patriotic celebrations, like the statues of General Arrighi at Corte (1868), Vauban at Avalon (1873) and Vercingetorix at Clermont-Ferrand (1870), or later, the Lion of Belfort (1880). When war broke out in 1870, Bartholdi first served in the National Guard of Paris, before taking part in the defense of Colmar. After the annexation of Alsace, he only stayed episodically in his hometown. He continued the creation of national works, like the statues of Champollion at the collège de France (1875), Rouget de l’Isle à Lons-le-Saunier (1882), Diderot à Langres (1884), Gambetta à Ville d’Avray (1891). But Bartholdi was really internationally famous thanks to a major work of art sculpture: Liberty Enlightening the World. The statue, inspired by an abandoned project of illuminating the East Egypt, to the entrance of the Suez Canal, was offered in friendship by France to the United States and inaugurated in 1886. For its realization, Bartholdi was helped by Gustave Eiffel’s research office and by the engineer Maurice Koechlin.

However, Bartholdi did not forget his hometown that he continued to make more attractive with the support of his friend Georges Kern, president of the Verschönungsverein (Improvement Society). Besides the statue dedicated to General Rapp (1856), he also made the statue dedicated to Martin Schongauer (1860), the Bruat fountain (1864), the Schwendi fountain (1898) or the Alsatian cooper (1902). When he died in 1904, his widow gave the house in the rue des Marchands to the city of Colmar. In 1922 the city created a museum there, dedicated to the artist. Besides this tribute, the city erected also a monument to the sculptor in 1907 and then a replica of the Statue of Liberty to commemorate the centenary of his death.

from Monday to Friday from 9 am to 1 pm and from 2 pm to 4 pm.
We are closed on Saturdays and Sundays.